FANUC specializes in factory automation and counts big names like Audi, Freixenet and STIHL among its portfolio. The Japanese group has more than 260 service locations in 108 countries. And one of them undeniably stands out: the brand new Benelux headquarters in Mechelen, Belgium. Because FANUC Benelux doubled its revenues and team in barely five years, it was high time for a more spacious and more inspiring head office.

For the design concept of the 5,117 m² building, the world-leading factory automation company relied on Alternativ. Paul Ribus, CEO of FANUC Benelux, couldn’t be happier: “This building is key to furthering our growth – not only in terms of the space we have at our disposal now, but also in terms of allure. It offers huge added value to our employer brand. Our people are proud to be a part of this project, and they keep discovering new aspects of it every day. We also notice that the unique concept spontaneously attracts new talent.”

Paul Ribus was envisioning a space where employees would feel right at home, and where visitors would be happy to come over and get inspired by the latest technologies. “We were looking for a concept with different sections, each with their own look and feel: from playful or relaxing to more business-like,” Paul explains. “We wanted to create a space where people would discover new things every day.” The CEO presented this challenge to the team of Alternativ, who managed to wow FANUC with their concept.

For a design and build company like Alternativ, FANUC’s request was somewhat unusual. After all, the ‘build’ part of the project was already in full swing by the time they came on board. Yet the team did manage to come up with exactly the right story within that framework. Alternativ opted for a concept that managed both to highlight the museum-like character of the enormous FANUC-building and to bring the necessary warmth and connection across. Likewise, the design seamlessly merged the opposing worlds of the industrial robotic arms that the Japanese group is best known for and the human touch that FANUC Benelux was after.

Challenge as the common thread

Alternativ created 3D imagery to communicate their vision to Paul and his team, who were especially impressed with its out-of-the-box mentality. “We had a clear mental picture of the spaces, but the concept and layout that Alternativ proposed differed quite extensively from what we had in mind. They took the project into a completely new direction. And we loved it,” says the CEO. “In other words, the fact that the building was already there did not stop them from adding a high degree of flexibility. For instance, they advised against plastering all of the walls and suggested a concrete look for some of them instead.”

Alternativ even encouraged FANUC to remove some of the existing walls. While Paul and his team were not expecting this move, they immediately saw its added value: “Alternativ continually came up with highly original ways to connect the spaces of each floor, and with solutions to create more openness and light.”

“Alternativ launched ideas that we would never have thought of, and that contributed massively to the overall design,” Paul adds. “We had an industrial look in mind for the office spaces but were planning on adding standard lighting. Alternativ countered that with a suspended ceiling with indirect lighting – and this has indeed become a distinguishing architectural feature of our building.”

From advice to furniture

After FANUC Benelux gave the concept the green light, Alternativ kept an eye on the implementation with weekly site meetings and advice on everything from floors to ceilings. And though the partnership originally revolved only around the interior design of the FANUC head office, Paul and his team quickly decided they wanted Alternativ to deliver the furniture as well.

Paul: “They earned our trust. Alternativ understood what we wanted and where we were going. So, we asked for their ideas on how to decorate everything, too. We had extensive discussions on colors and textures. Alternativ created a mood board and went from there to refine the design and finishing.” Paul really appreciated the fact that he was continually presented with different options and could always ask questions. “There were times when I was making decisions late in the evening or during the weekend, and even then Alternativ was very quick to respond. Working with them, I felt a tremendous sense of involvement.”

The result is a FANUC head office where every detail has been thought of. Paul: “The flow makes sense, and both our employees and visitors feel at ease here. The atmosphere is cozy and anything but boring. It always feels a little like coming home.” The building is equipped with desks, meeting rooms, showers, several kitchens and coffee corners, as well as an auditorium, a reception area with high-tech front desk, and an ‘Experience Center’ where customers can see the FANUC robots at work and can get to know the FANUC portfolio. Trainees have access to a cafeteria and a large outdoor space. For FANUC employees, too, there is a beautiful terrace on the second floor.

Paul: “The building has so many lovely spots, and people make the absolute most of it: they are constantly trying out new corners and settling now in one place, then in another. Meeting, relaxing, focusing: every zone has its own function, and its colors and furniture that evoke a different feeling. Our office chairs are really high quality, and we have height-adjustable desks.” The CEO jokingly says it will take years before he and his team have discovered all there is to discover about their new headquarters.

Alternativ notices that more and more companies are rethinking their office space in the aftermath of the corona crisis and the rise of working from home. Company buildings are evolving from places where employees have to be to places where they want to be and that are worth the commute. The new FANUC headquarters certainly tick that box. In addition, the building is not only large enough to ensure the employees’ safety, but also to accommodate FANUC Benelux’s further growth.

And speaking of growth: the FANUC-Alternativ partnership is continually expanding as well. “A follow-up project?” Paul can’t help but smile at the question. “We haven’t even stopped yet!” From window shades to curtains: FANUC is also counting on Alternativ for these extras. Clearly, Paul and his team are happy with the way things are going. “The entire project has been handled brilliantly, right down to the very last detail. The people at Alternativ really make a difference, and we love to pamper them in return. For instance, when we found out that the interior designer is a huge chocolate lover, we made sure to always have a stash ready for our site meetings together. We really clicked with Alternativ from day one.”

“The project manager at Alternativ started referring to us as ‘the crazy customer’ pretty quickly, because we continued to raise the bar,” Paul explains. “We loved the gutsiness of that statement, and we threw it right back at him: ‘Alright, show us something crazy then.’ Well, they certainly delivered,” the CEO concludes with satisfaction. 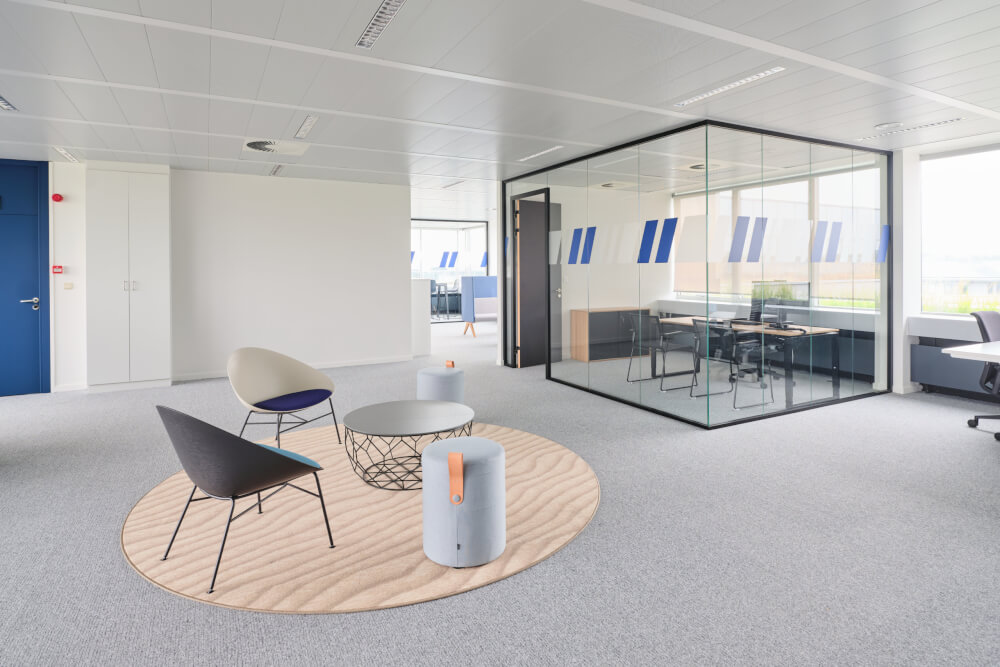